Community Impact Newspaper published a story about the naming of the new Alyssa Ferguson Elementary. The original story follows:

In a unanimous vote, the Fort Bend ISD board of trustees has named a new elementary school after one of the district’s former students.

The elementary school, scheduled to open in fall 2023 at 1300 Heritage Park Drive, Missouri City, is named after Alyssa Ferguson, who died in January 2017 as a freshman at Ridge Point High School after a battle with medulloblastoma, a brain cancer, according to an April 11 FBISD agenda report.

Ferguson, who lived in the Sienna community, was first diagnosed with the cancer while enrolled at Baines Middle School at the age of 12, according to an April 11 news release from the school district.

The naming comes due to Ferguson’s character and sense of giving while in the midst of her battle with cancer, according to the district’s news release. When asked what wish she wanted to receive from the Make-a-Wish Foundation, Ferguson replied, “The only reason I got this wish is because I got sick. I should use it to help someone. I didn’t earn it.”

Instead, Ferguson used her wish to dig a well in a village in Zimbabwe that did not have access to clean water. Since then, eight wells have now been dug because of the mission Ferguson started, according to the news release.

Per board policy, FBISD established a committee to select a name for the new school in early 2022; the committee was comprised of teachers, parents, community representatives and district staff along with FBISD Board President Dave Rosenthal and FBISD Board Member Kristin Malone.

“As a committee, we felt Alyssa’s life provides a great example to our students on how they can utilize the Profile of a Graduate attributes in serving as compassionate citizens and servant leaders,” Rosenthal said in the news release.

Link to original story above can be found here.

The text and photos of this post are from A Shelter for Cancer Families, a charity near and dear to the Fergusons. 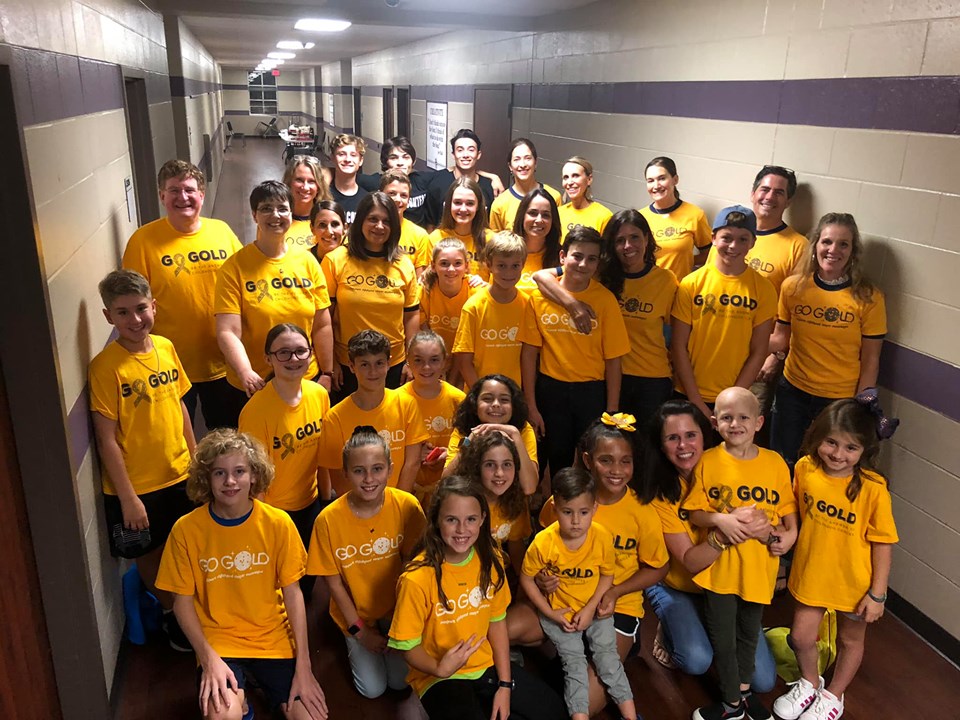 Families impacted by childhood cancer pose with Donny, Alex, and Zach before going on stage.

So proud of A Shelter for Cancer Families’ Ambassador Donny Phillips. When presented with an opportunity to showcase his talent at a high school event, Donny chose to use his platform to create awareness of childhood cancer and did he ever! Even the Houston floods couldn’t dampen the PURE GOLD that shown brightly last night. Donny recruited his friends Alex & Zach to join him. They surprised the entire audience when they dedicated their performance to their late classmate Alyssa Ferguson. World Changers (a song written about Alyssa by Christian musical artist Matthew West) played as the trio welcomed the Ferguson family and others in the community affected by childhood cancer onto the stage. Donny held Felipe “Pipe” Muyshondt (who is currently battling the same type of brain tumor that Donny’s younger brother and cancer survivor, Jake survived five years ago) as the song played. Truly a golden moment, none in the audience will soon forget. 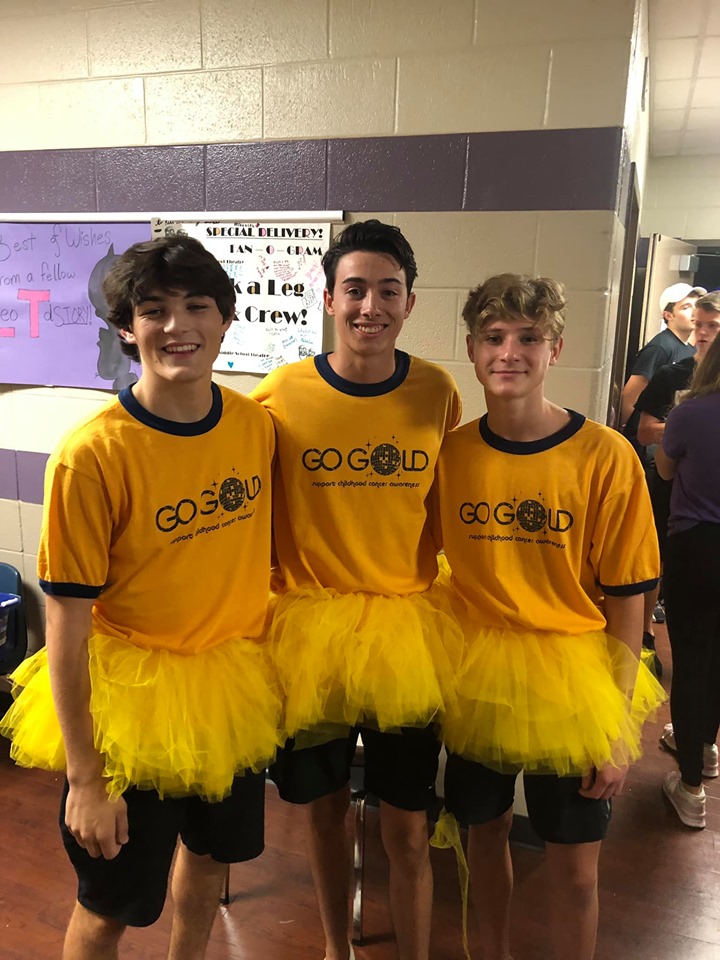 Zach, Donny, and Alex in their GO GOLD costumes

Here is a short video of their performance:

Today, more than 100 students signed up to join the World Changers Club at Ridge Point High School, Alyssa’s former high school. The newly formed club was started by two of Alyssa’s friends — Addie Howell and Josefina Garcia. It is being sponsored by the principal, Len Brogan. 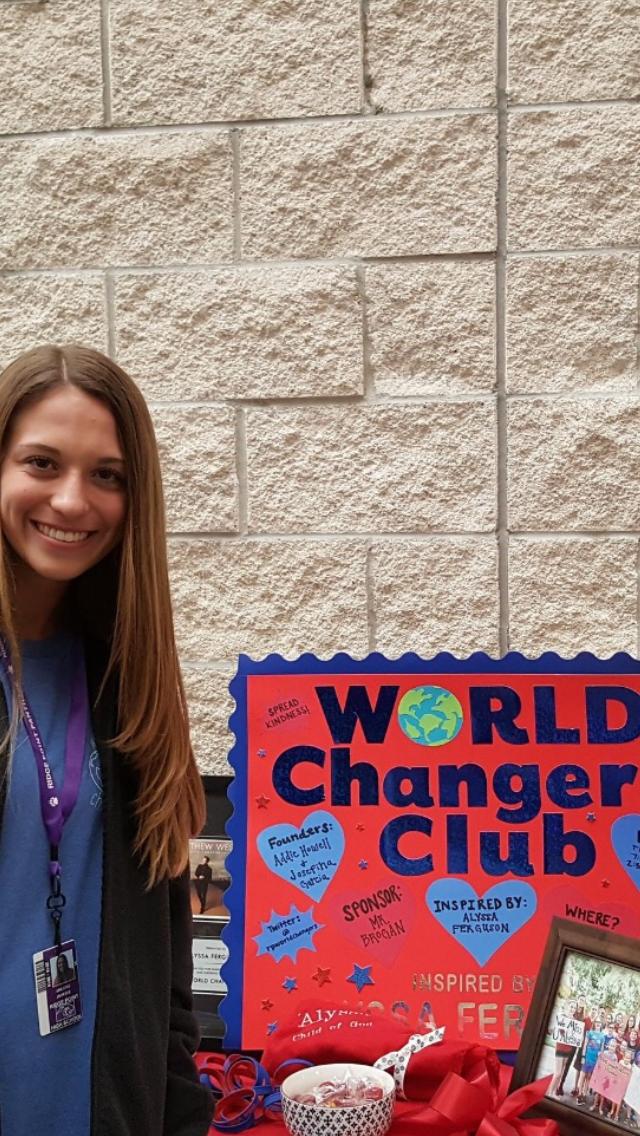 The focus of the club is to transform club members into World Changers through service and volunteer work.

“We are grateful to Addie, Josefina, and Mr. Brogan for honoring Alyssa in this manner. Without a doubt, she would have been pleased to know that fellow students are also being World Changers and making their own impact in this world,” stated the Fergusons. 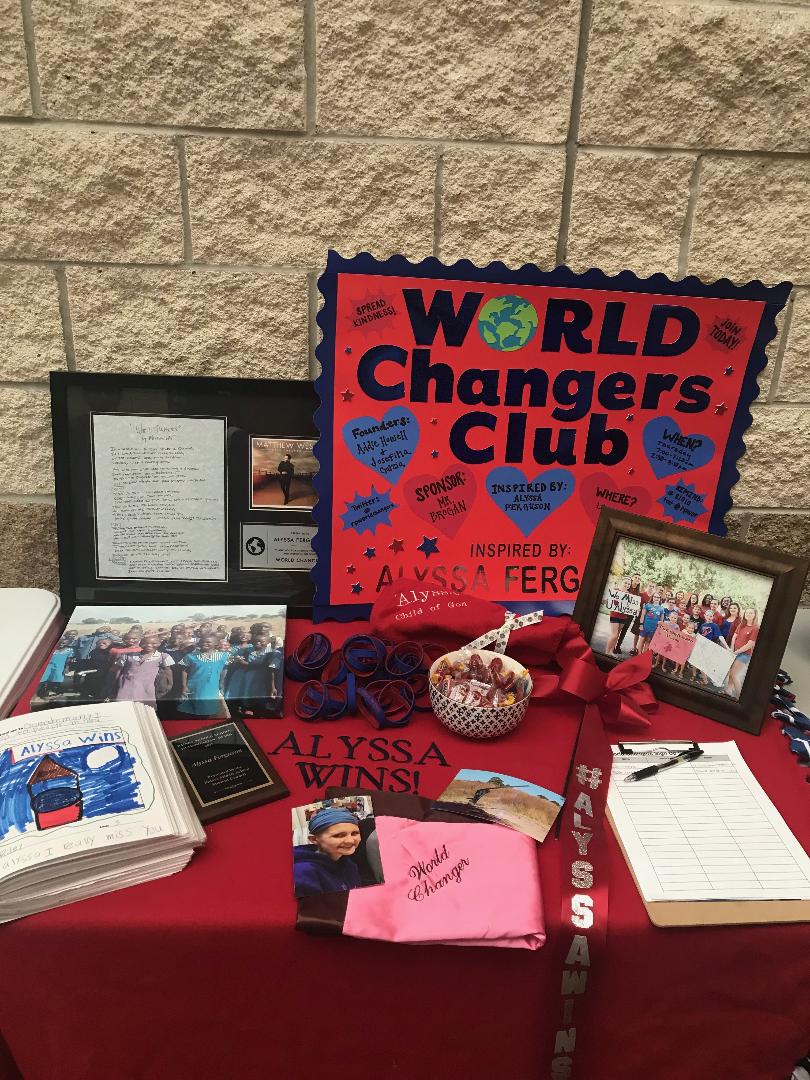 The World Changers Club is planning several projects for this school year and will most assuredly make an impact.

A documentary by Ridge Point High School students Kaitlin Catuiza, Kathleen Cruz, and Sneha Joseph earned the People’s Choice Award and also tied for First Place Documentary at the third annual Fort Bend ISD Film Festival. “World Changers: The Alyssa Ferguson Story” focuses on the legacy that freshman Ferguson left behind after losing her battle to cancer last year. The documentary also won first prize in its category. The Fergusons were deeply touched by the film and grateful to these students for telling Alyssa’s story in such a powerful way. Congratulations, girls!